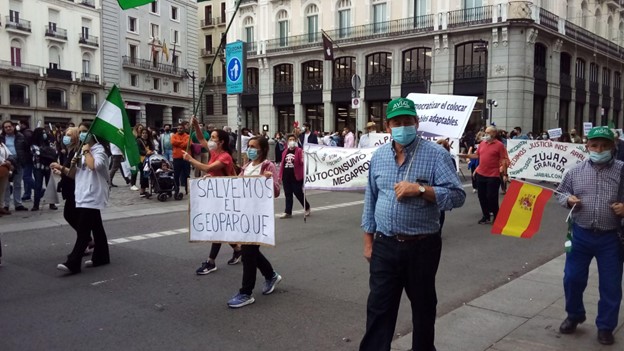 Demonstrators waving the flags of Andalusia and Spain protest in October 2021 under the slogan “Renewables yes, but not like this” in Puerta del Sol in central Madrid. Photo by Ricardo Gines

The region around Jimena, parts of which see more than 3,000 hours of sunshine annually, is set to become the heart of Europe’s massive investment in photovoltaic power generation.

But the push towards alternative energy sources is already raising concerns among those on the frontline as companies scramble to cash in on a glut of EU subsidies and recovery funds.

Threats of expropriation and huge land purchases in the area have pushed some local administrations to breaking point and have cast a shadow over solar farm projects, some of which have received significant investment from China.

This investigation was carried out by Spanish freelance journalist Ricardo Ginés and Angus McInnes, a project officer at the non-profit Forest Peoples Programme in the United Kingdom.