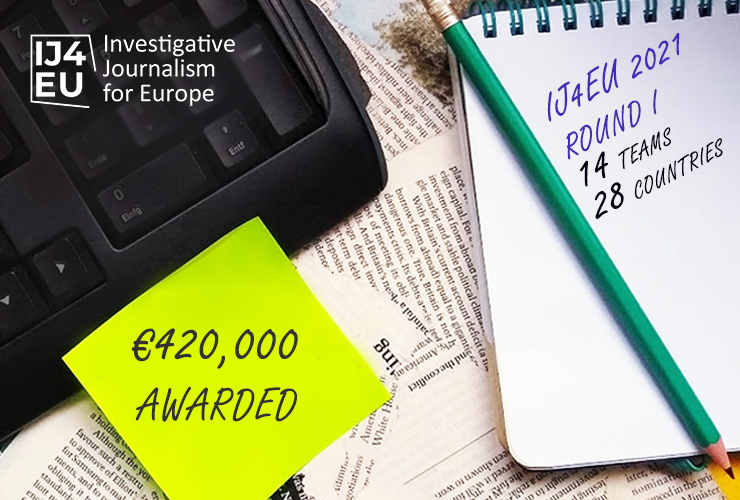 An independent jury has awarded a combined €420,000 to 14 cross-border reporting teams under the first call of the year for the IJ4EU fund’s Investigation Support Scheme.

The grants will allow journalists across the European Union and beyond to collaborate on topics ranging from organised crime and corruption to “fake green finance” and conflicts of interest in COVID-19 research.

In 2021, the scheme will disburse €835,000, offering grants of up to €50,000 to journalistic teams probing transnational subjects of public interest. A second call will open shortly in August.

In no particular order, the successful projects chosen under the first call were:

The Investigation Support Scheme runs alongside a separate IJ4EU funding and mentoring scheme designed exclusively for freelancers. Grantees of the Freelancer Support Scheme, which has just one call in 2021, will be announced shortly.

Editorial independence is the cornerstone of both schemes. IJ4EU’s financing model allows public and philanthropic money to support world-class investigative journalism in Europe without fear or favour.

Ninety percent of IJ4EU’s coffers come from the European Commission, channeled via a consortium of independent intermediary organisations led by IPI. The other members of the consortium are the Maastricht-based European Journalism Centre and the European Centre for Press and Media Freedom in Leipzig.

An independent jury of senior editors and investigative journalism specialists is key to the integrity of the selection process, guaranteeing a firewall between IJ4EU’s donors and grantees.

Under the first round of the 2021 Investigation Support Scheme, more than 60 cross-border teams from across Europe applied for a combined €1.9 million in funding.

The five-person jury — whose identities will be kept secret until the results of the scheme’s second call are made public in the autumn — chose the projects according to criteria including newsworthiness, cross-border relevance, the strength of the research and publication plan and financial need.

Now in its third year, IJ4EU has a war chest of €1.1 million in grants in 2021, alongside other forms of assistance such as mentoring, editorial support and legal help.

Following a successful pilot scheme in 2018, IJ4EU last year allocated €1.07 million in grants to 49 cross-border teams of journalists based all across Europe.

The result was more than 600 stories published by around 250 media outlets, reaching tens of millions of people. See the projects section and impact page on the IJ4EU site for more information.