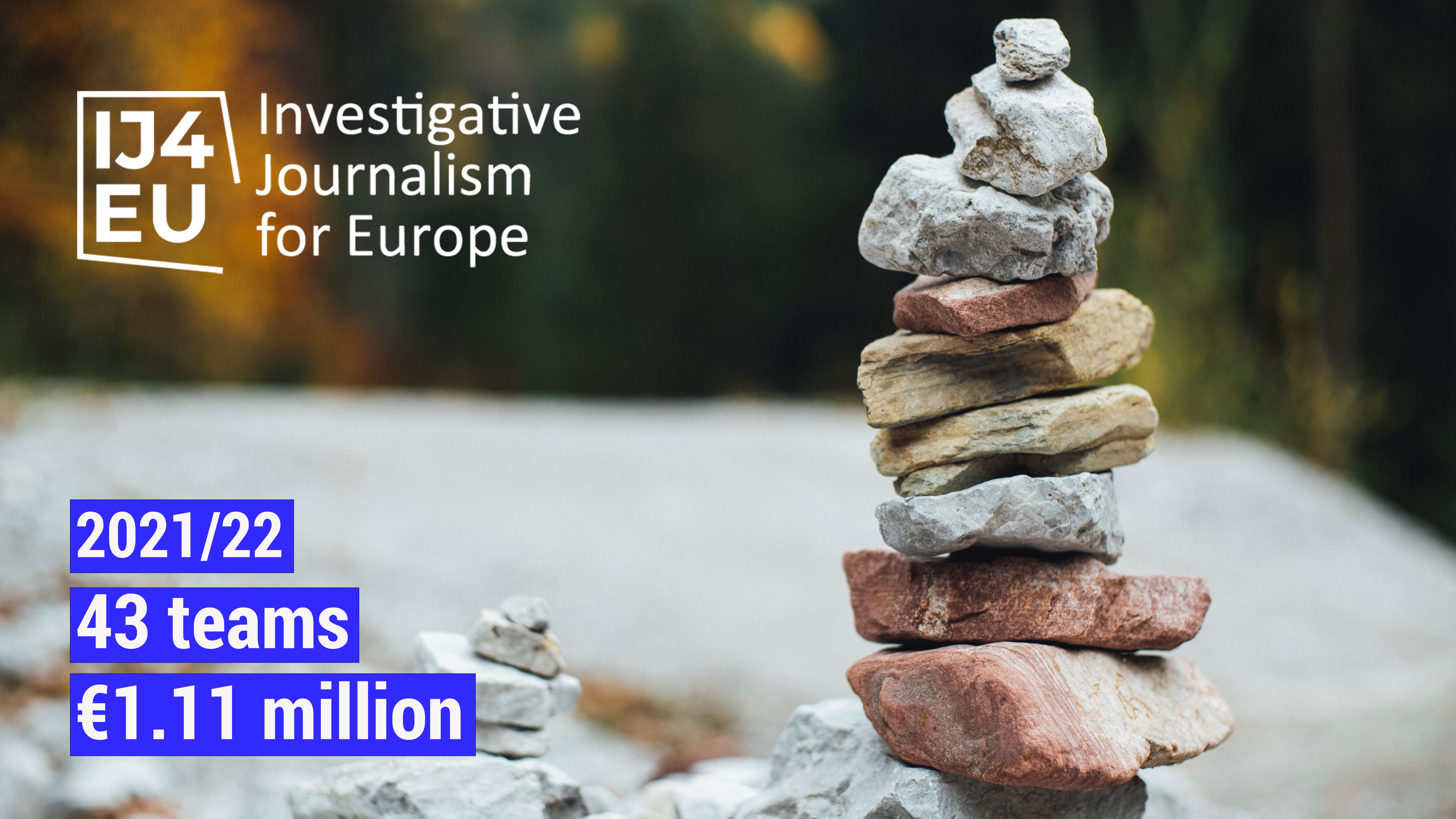 The Investigative Journalism for Europe (IJ4EU) programme has awarded more than €1.1 million in grants during the current funding year, allowing reporters across the European Union and beyond to launch collaborative investigations in the public interest.

For IJ4EU’s 2021/22 grant cycle, independent juries have allocated an average of €25,800 to 43 cross-border teams under two grant programmes: the flagship Investigation Support Scheme and a new scheme designed exclusively for freelancers.

That brings the running total of grants disbursed since IJ4EU’s inception in 2018 to more than €2.5 million.

Now in its third edition, IJ4EU is run by the International Press Institute, the European Journalism Centre and the European Centre for Press and Media Freedom.

Against the backdrop of a global pandemic and a deterioration in media freedom in some countries, the IJ4EU consortium seeks to provide critical support to newsrooms and freelancers as they tackle ambitious projects involving transnational subjects.

In 2021, almost 220 cross-border journalistic teams applied for a combined €5.8 million in grants from the IJ4EU fund.

After a selection process that included vetting and shortlisting by internal and external advisors, and final decisions by independent expert juries, the IJ4EU fund disbursed €1,110,869 to 43 projects.

The selected teams include dozens of journalists based in more than 40 countries. Each team has core members based in at least two EU member states or at least one EU member state plus the United Kingdom. Additional team members hail from third countries as far afield as Belarus, Indonesia, Kenya, Mexico, Russia and Turkey.

They represent news outlets operating across all types of media platforms — large and small, public and private, emerging and traditional — as well as freelance journalists.

Teams will publish or broadcast the findings of their investigations over the coming days and weeks.

Grantees on the Freelancer Support Scheme benefit from a tailor-made mentorship programme and the chance to pick the brains of global experts in investigative journalistic techniques.

All IJ4EU teams are eligible for additional funding to cover unexpected legal costs. They can also access the Media Freedom Rapid Response mechanism if they encounter legal perils or press freedom threats. Grantees are also welcome to apply for free membership of the International Press Institute’s global network of editors, media executives and prominent journalists.

Meanwhile, IJ4EU’s third annual #UNCOVERED conference on European cross-border investigative journalism will provide networking and learning opportunities. The event is scheduled to take place in Berlin on March 31 and April 1, 2022.

On the first day of the conference, winners of the IJ4EU Impact Award will also be announced. Celebrating excellence in cross-border investigative journalism in Europe, the award is open to both IJ4EU grantees and journalists beyond the programme.