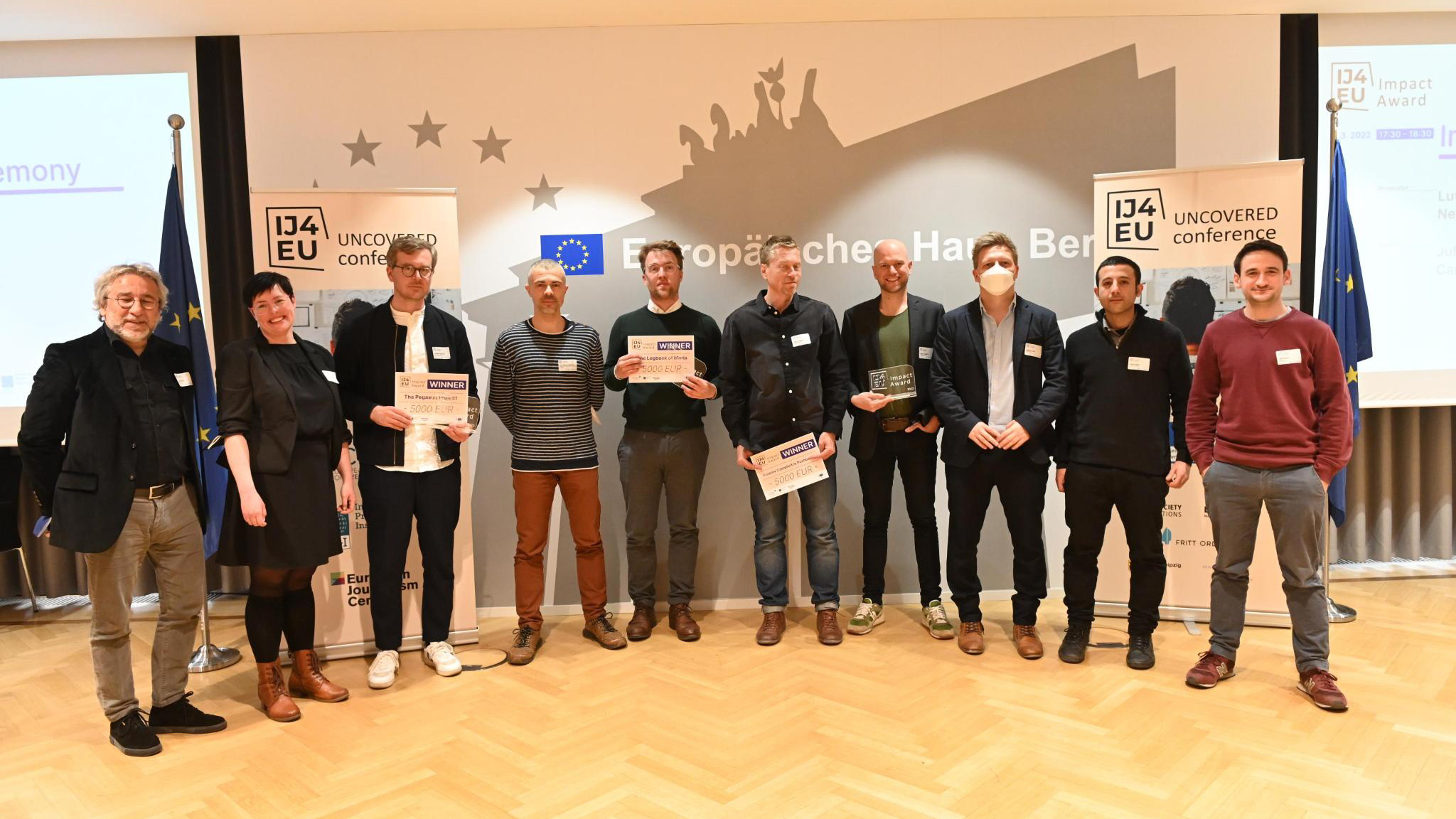 Selected by an independent jury, the winning investigations were:

First prize went to a team led by Forbidden Stories, a network of journalists whose mission is to protect, pursue and publish the work of other journalists facing threats, prison or murder.

“The Pegasus Project is a successful and massive journalistic undertaking that revealed how governments all over the world spy on journalists, politicians and activists using the so-called Pegasus spyware developed by the Israeli technology organisation NSO Group,” jury member Julia Vernersson, managing director of Hostwriter, said.

“The jury valued that the project is a prime example of cross-border investigative journalism at its best. Building on a powerful leak of 50,000 phone numbers, a great team of reporters from all over the world came together, and with an elaborate methodology, produced a high-quality investigation on a global topic, creating global impact. The result of their work is also vital for the future of journalism.”

Vernersson announced the winners during a ceremony on March 31 at UNCOVERED, the annual conference of the IJ4EU programme.

The IJ4EU Impact Award recognises the best investigative journalism carried out by teams collaborating across frontiers in EU member states.

Managed by the European Centre for Press and Media Freedom (ECPMF) in cooperation with IJ4EU partners the International Press Institute (IPI) and the European Journalism Centre (EJC), the prize was open to investigations published or broadcast between October 1, 2020 and September 30, 2021.

“Frontex Complicit in Pushbacks picked a highly relevant topic for our common European future, managed to coordinate a large cross-border team of journalists, and revealed a systemic European problem: how the European Coastal and Border Guard Agency, Frontex, is complicit in the illegal pushback campaigns by the Greek authorities at the Greek/Turkish borders,” Vernersson said.

“The investigation showed that Frontex’s involvement is not only illegal, but it also violates international and European law. The jury found it exemplary how the team applied a human rights perspective to the issue, and prioritised human stories to showcase systemic problems.”

“The Logbook of Moria started very locally when in 2020 a reporter —  in what was then Europe’s largest refugee camp outside the village of Moria on the Greek island of Lesvos — saved the personnel’s logbook from the ashes of the fire which destroyed the camp,” jury member Can Dündar, a veteran Turkish journalist, said.

“This journalistic scoop, the discovery of the logbook documenting the tragic daily realities of the unaccompanied minors living there, however, became the foundation of a European cross-border investigation. The jury appreciated how the team elevated these dramatic daily local testimonies into a documentation of the continent’s handling of refugees. The Logbook of Moria is the draft for one of the saddest chapters of Europe’s history.”

The jury gave an honorary mention to an investigation into corporate landlords coordinated by Arena for Journalism in Europe, a Dutch-based foundation dedicated to cross-border collaborative and investigative journalism.

“The team behind the Cities for Rent project investigated how following the financial crisis in 2008, housing in Europe became an attractive investment for many international and local corporate landlords, and how this investment boom and the resulting higher rents affected average people, who very often could not afford to stay in their homes,” Dündar said.

“Using a large set of data, lots of different sources and analysis, the team demonstrated how international cross-border investigations can connect the dots and show the big picture behind individual stories and come up with conclusions that can directly feed into policymaking.”

Journalism in the public interest

Now in its third year, IJ4EU provides grants and other forms of support to teams of journalists or news outlets in Europe investigating topics of public interest across borders.

IJ4EU is led by IPI, in partnership with EJC and ECPMF, and funded by the European Commission with co-funding from Open Society Foundations, Fritt Ord Foundation, Fondation Nicolas Puech and the City of Leipzig.

To date, the IJ4EU fund has disbursed more than €2.5 million in grants to high-impact, cross-border projects.

To be eligible for the IJ4EU Impact Award, teams need not have received support from the fund, but two of the top four — Frontex Complicit in Pushbacks and Cities for Rent — were grantees during the second edition of the programme.Of this year’s 10 shortlisted nominations, six projects were supported by the IJ4EU fund.