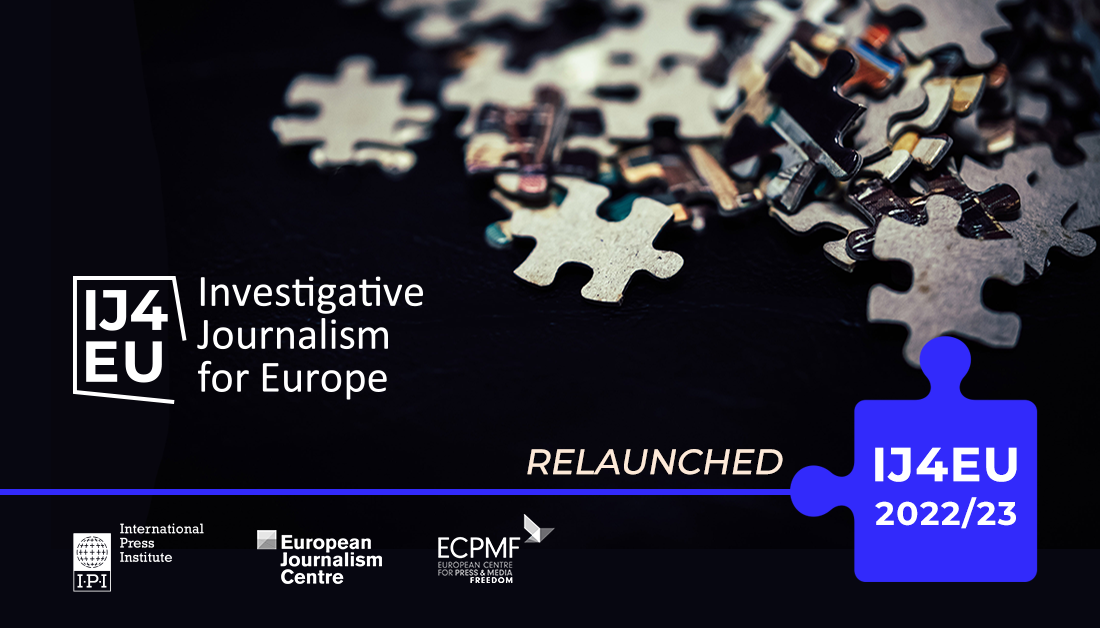 The Investigative Journalism for Europe (IJ4EU) fund will allocate €1.23 million in grants to cross-border projects across Europe in 2022/23, offering a lifeline for watchdog journalism in troubled times, the organisations that run the programme said on Wednesday.

Back for a fourth edition, IJ4EU has secured core financing from the European Commission to continue its work fostering collaboration between European journalists as they tackle transnational subjects in the public interest.

“Recognising the severe financial and political pressures facing many newsrooms and freelancers, not to mention the impact of both the pandemic and the war in Ukraine, the latest IJ4EU edition will include a greater element of ‘emergency’ funding,” Timothy Large, IPI’s director of independent media programmes, said.

“This means that among the criteria for selecting projects, independent juries will assess the urgency of the need for support — though the overall quality of proposals will remain their primary consideration.”

Since its inception in 2018, IJ4EU has established itself as a trusted intermediary for channelling public and philanthropic money into world-class investigative journalism without compromising editorial independence.

To date, IJ4EU has disbursed more than €2.5 million in grants to cross-border projects, allowing hundreds of journalists in Europe and beyond to conduct ambitious investigations on a spectrum of public-interest topics.

Alongside core funding from the European Commission, IJ4EU received co-financing in 2021/22 from Open Society Foundations, Fritt Ord, Fondation Nicolas Puech and the City of Leipzig.

Donors to the IJ4EU fund are not allowed to influence the selection of projects and the IJ4EU consortium is committed to safeguarding the editorial independence of grantees.

During the 2022/23 edition, IJ4EU will disburse €1.23 million through two well-established grant schemes.

Running in parallel is the Freelancer Support Scheme, offering grants of up to €20,000 to journalists working outside of newsrooms. The freelancers will also get tailored assistance including mentoring throughout the lifecycle of their projects.

“IJ4EU has established itself as a cornerstone of support for investigative journalism in Europe,” Lars Boering, director of the European Journalism Centre, said.

“That is why the European Journalism Centre foundation is pleased to continue this collaboration, with a special focus on building the resilience of freelance journalists across Europe. Our grantmaking-plus programmes give them access to resources, training, coaching and mentorship — so they can get even better at what they do.”

Unlike other grant schemes, IJ4EU funding can be used for almost any purpose related to the production of journalism, including paying salaries of staff reporters or freelancers.

Both the Investigation Support Scheme and the Freelancer Support Scheme will have two simultaneous calls for applications, one in September 2022 and one in January 2023.

The two schemes will have separate independent juries, which will select projects based on clear criteria published on the IJ4EU website.

Journalists from Ukraine will be treated as equivalent to their counterparts in EU candidate countries, even though the country has not yet been granted official candidate status. This exception reflects IJ4EU’s commitment to offering emergency support for investigative journalism following Russia’s invasion of Ukraine.

Unlike previous IJ4EU editions, the United Kingdom will no longer be treated as equivalent to EU member states.

As long as teams meet the core eligibility criteria, they may include additional journalists from any country.

The latest IJ4EU programme will feature events familiar from previous years, including an award celebrating excellence in cross-border investigative journalism in Europe and a conference designed to foster collaboration and innovation.

“IJ4EU stimulates research and debate on European topics,” ECPMF Managing Director Lutz Kinkel said. “The UNCOVERED Conference presents these findings, and we are proud to say: ‘Here you can experience what a European public sphere really means.’

Along with funding and networking opportunities, all IJ4EU grantees will benefit from practical and editorial assistance, allowing them to work independently in a supportive environment.

All grantees will have access to a contingency fund for unexpected legal costs arising from their investigations. Money will also be available for software, databases and other tools.

In the event of threats or intimidation, journalists will have full access to the Media Freedom Rapid Response mechanism managed by ECPMF, as well as advocacy support from IPI, the world’s oldest press freedom organisation.

One is the introduction of public “Cross-Border Masterclasses”, to be held in the run-up to calls for grant applications.

Run by the Amsterdam-based Arena for Journalism in Europe, the free online workshops will help journalists of all experience levels develop ideas for cross-border stories and, where needed, find partners to collaborate with. The goal is to improve teams’ chances of getting funding.

Meanwhile, stipends will be available for past and present IJ4EU grantees to attend Dataharvest: The European Investigative Journalism Conference in May 2023. Dataharvest is organised by Arena for Journalism in Europe.

In addition, IPI will offer training to newsrooms and freelancers in coping with the scourge of online harassment. And ECPMF will hold training on mitigating legal dangers.

More details of the grant schemes on offer and the timing of calls for applications will follow shortly. Interested journalists are encouraged to visit the IJ4EU site and sign up to our newsletter.