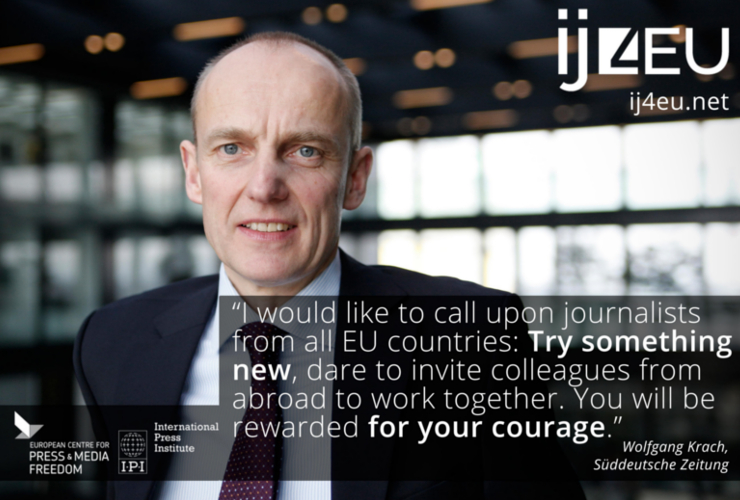 Wolfgang Krach, editor-in-chief of Germany’s Süddeutsche Zeitung, will serve as the jury chair of the inaugural Investigative Journalism for Europe (#IJ4EU) fund, which will distribute up to €450,000 to support cross-border investigative journalism projects in the European Union.

As editor of the Munich-based Süddeutsche Zeitung, Krach led the paper’s investigation of the Panama Papers in cooperation with the International Consortium of Investigative Journalists (ICIJ) and over 100 media organizations around the world. The investigation, based on 11.5 million documents on the offshore tax activities of the superrich that were leaked to Süddeutsche Zeitung, received the 2017 Pulitzer Prize for Explanatory Reporting. Following a second major leak to the newspaper, Krach oversaw the Paradise Papers investigation, again in collaboration with the ICIJ and dozens of media outlets.

Krach joined Süddeutsche Zeitung in 2003, first as managing editor and then later as deputy editor-in-chief. He became the paper’s top editor in March 2015. Krach was previously Berlin deputy bureau chief for the newsmagazine Der Spiegel and a political reporter for the newsmagazine Stern.

The #IJ4EU grant is managed by the International Press Institute (IPI) and was launched last month by IPI together with the European Centre for Press and Media Freedom (ECPMF).

“We are thrilled that Wolfgang Krach will bring his tremendous experience and credibility to the #IJ4EU fund”, IPI Executive Director Barbara Trionfi said. “His leadership of the independent jury will ensure that the funds available under this grant go to support strong, innovative investigative projects that aim to reveal facts in the public interest.”

Krach accepted the chairmanship with a call on journalists in the EU to boldly seek out cross-border opportunities.

“In times when journalists are threatened or even killed for doing nothing else but their job, it is essential to encourage our colleagues to undertake in-depth coverage and investigative reporting”, Krach said. “The new #IJ4EU grant will help journalists from all over Europe start international cooperation projects that might be too difficult or too big for one media organization in one single country alone. We at Süddeutsche Zeitung have had extremely good experience with such cross-border cooperation.”

He added: “Serving as chair of the jury of the #IJ4EU fund, I would like to call upon journalists from all EU countries: Try something new, dare to invite colleagues from abroad to work together. You will be rewarded for your courage.”

The #IJ4EU fund is intended to foster and strengthen collaboration among EU-based journalists and newsrooms on revelations in the public interest and of cross-border significance. The fund aims to support investigations that reflect the media’s watchdog role and that assist the public in holding those in power accountable for their actions and to their obligations. In so doing, it seeks to contribute to the sustainability of democracy and the rule of law in the EU.

In 2018 cross-border teams of investigative reporters and/or media outlets based in at least two EU countries can apply for grants up to a maximum of €50,000. The deadline for applications is May 3, 2018.

To apply, and to learn more details about eligibility, requirements and selection process, please visit the fund’s website: https://www.ij4eu.net/.