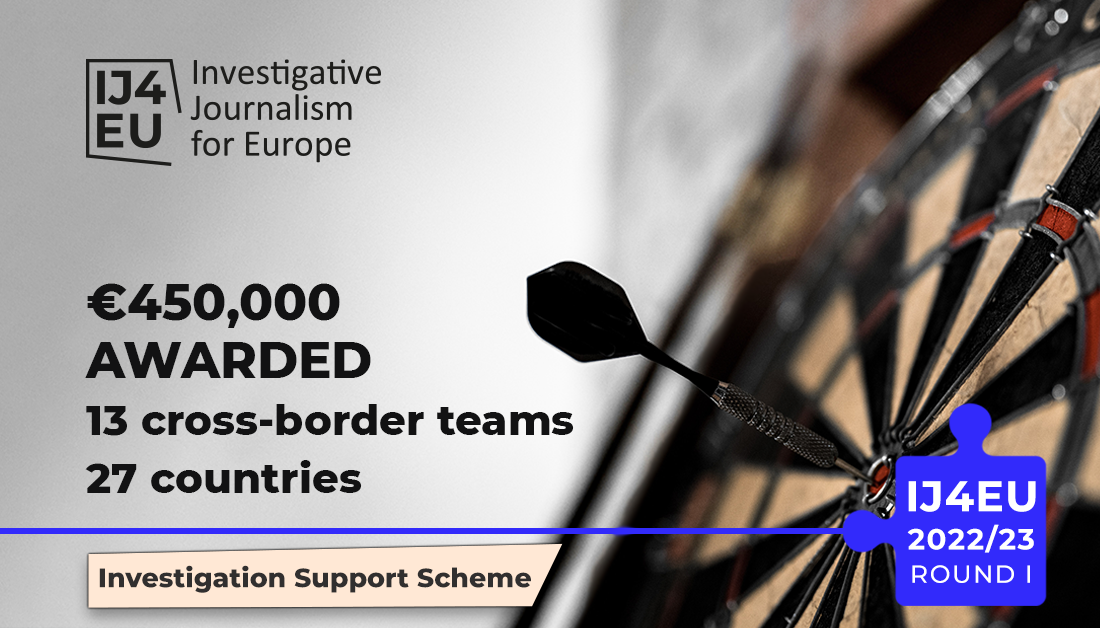 An independent jury has awarded a combined €450,000 to 13 cross-border reporting teams under the latest call for the IJ4EU fund’s Investigation Support Scheme.

The grants will allow journalists based in the European Union, EU candidate countries and beyond to collaborate on topics ranging from surveillance, security and sanctions-busting to energy, pollution, trafficking and land grabs.

Run by the Vienna-based International Press Institute (IPI), the Investigative Support Scheme is the flagship grant programme of the Investigative Journalism for Europe (IJ4EU) fund, now in its fourth edition.

In no particular order, the successful projects chosen under the latest call were:

The Investigation Support Scheme runs in parallel to a separate IJ4EU funding and mentoring scheme designed primarily for freelancers. Grantees of the Freelancer Support Scheme will be announced on November 9.

Editorial independence is the cornerstone of both schemes. IJ4EU’s financing model allows public and philanthropic money to support world-class investigative journalism in Europe without any question of editorial interference.

Most of IJ4EU’s coffers come from the European Commission, distributed via a consortium of independent intermediary organisations led by IPI. The other consortium members are the Maastricht-based European Journalism Centre and the European Centre for Press and Media Freedom in Leipzig.

Independent juries of senior editors and investigative journalism specialists are key to the integrity of the selection process, guaranteeing a firewall between IJ4EU’s donors and grantees.

Since its inception as a pilot scheme in 2018, IJ4EU has allocated around €3 million in grants to cross-border investigative projects, allowing hundreds of journalists across Europe to tackle ambitious investigations in the public interest.

Under the latest round of calls for the Investigation Support Scheme and Freelancer Support Scheme, 118 investigative teams with journalists based in 45 countries applied for a combined €3.99 million in funding.

The Investigation Support Scheme’s five-person jury — whose identities will be kept secret until the results of the next call are made public in the spring of 2023 — chose the projects according to criteria including newsworthiness, cross-border relevance, the strength of research and publication plans and financial need.

Check out our projects section to learn more about investigations previously funded by IJ4EU.