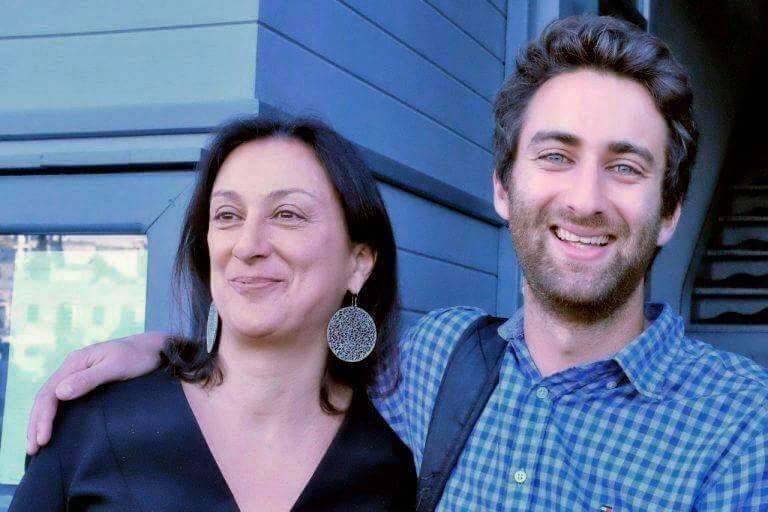 For Matthew Caruana Galizia, this was personal.

Daphne was the first Maltese journalist to investigate the government’s plan to allow the sale of passports as a legalised transaction. But before she could complete her work, she was assassinated by a car bomb just metres from her home.

Since her murder in October 2017, Matthew has vowed to continue this and other investigations begun by his mother, a journalist known for her courage in standing up to corruption, clientelism and all manner of criminal activity.

“We wanted to send a message to everyone who was behind my mother’s murder and to all who was part of the campaign to dehumanise or harass her, that murdering a journalist doesn’t stop their investigations,” he told the International Press Institute in an interview.

This year, Matthew drove that message home with the release of Passport Papers, a joint investigation by the Daphne Caruana Galizia Foundation, The Guardian, the Dossier Centre and five independent media organisations in Malta.

Supported by the IJ4EU fund for cross-border journalism, the investigation exposed what really happens when rich investors attempt to buy passports in Malta.

“We found out that the scheme was set up to be a fraud right from the beginning,” said Matthew, an investigative journalist in his own right who runs the Daphne Caruana Galizia Foundation, set up in 2018 to pursue justice for Daphne and support independent media.

Despite the headstart provided by his mother’s work, proving this “fraud” was no mean feat. For one thing, the team had to reestablish contact with the whistleblower who had approached Daphne years earlier.

“The second challenge was to convince the whistleblower that they could trust us in the same way that they trusted my mother,” Matthew said.

The team comprised around 30 people. In addition to journalists from the Daphne Caruana Galizia Foundation and media partners in Britain and Russia, it included Maltese reporters from Lovin Malta, Malta Today, The Malta Independent, the Times of Malta and The Shift.

Matthew had plenty of experience working on cross-border investigations and knew the best ways to share information with remote team members. Still, there was a lot to learn. And for some team members, it was their first real taste of investigative journalism or handling big datasets.

In the end, the team had far more data to analyse than they’d expected — leaked from Henley & Partners, the firm contracted by the Maltese government to operate the passport sales programme.

Staff at the Daphne Caruana Galizia Foundation, which headed up the project, handled most of the data.

“It was kind of a journalistic school for them as well, but it was important for the Foundation to do this,” Matthew said. “The Foundation put hundreds of hours into research. Stuff was done before we even opened up access to journalists from media organisations.”

After a deep dive into exactly who was applying under the scheme, the team revealed that many would-be Maltese citizens were doing laughably little to get their passports — other than coughing up cash.

Hailing mostly from Russia, Saudi Arabia and China, many applicants spent just a couple of weeks in Malta during their 12-month application period, renting cheap apartments as bogus addresses for the rest of the year.

In Matthew’s view, loopholes in the system could easily be fixed — if only the government wanted to.

“There is no genuine link between the possible buyers [and Malta],” he said. “Once you force the applicants to establish a genuine link, then they’re no longer interested in buying passports.”

The team faced blowback during the investigation as passport prospectors threatened legal action. The journalists are in the thick of a defamation case brought by one Bangladeshi applicant whom they contacted for comment.

“It disrupts our work, which is the intention,” Matthew said.

Though the investigation has been long and challenging, Matthew and his team are keen to continue work on the topic.

“I’m not 100 percent sure, but I believe it has changed the understanding of the scheme and that the problems with it can be fixed,” he said. “But aside from those problems, there is a big structural problem that is inextricable from the scheme itself, which is that the whole scheme is a fraud.”

Following in his mother’s footsteps, Matthew is determined to hold power to account through investigative journalism. And he sees such journalism as increasingly cross-border in nature.

“Corruption in Europe is naturally cross-border because of money, banking and trade services. So investigative journalism should also be cross-border.”

Visit the IJ4EU site to see all the stories in Passport Papers.

Cover photo: Investigative journalist Matthew Caruana Galizia poses with his mother, Daphne Caruana Galizia, who was murdered for her work in October 2017.