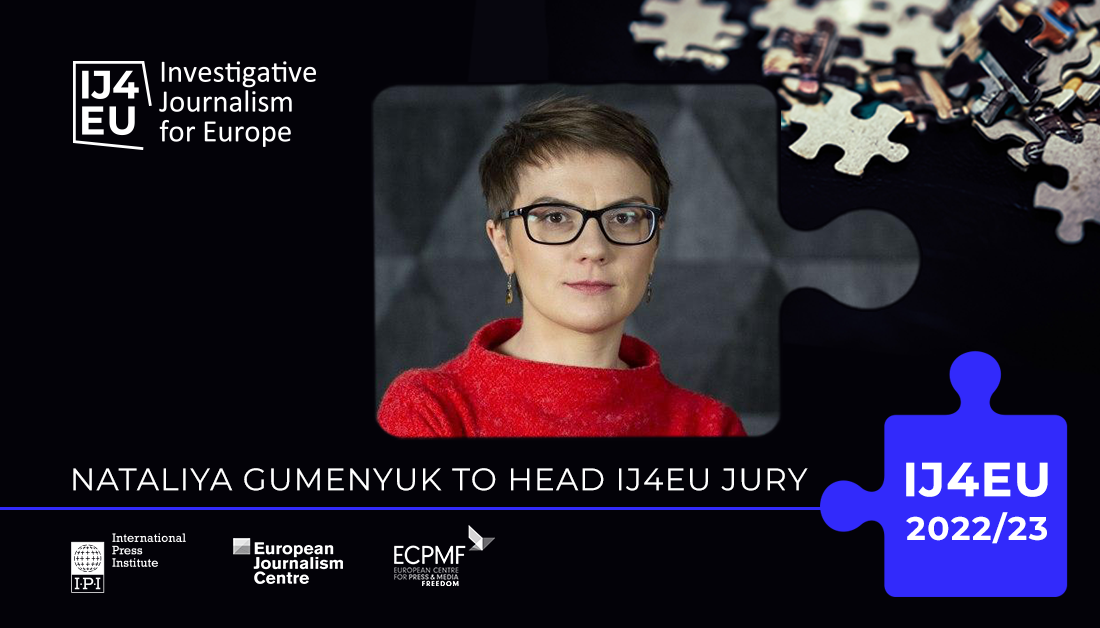 Nataliya Gumenyuk, an award-winning Ukrainian reporter and author known for championing public interest journalism, will serve as the jury chair of the flagship grant scheme of the IJ4EU fund in 2022/23, the International Press Institute (IPI) said on Thursday.

Gumenyuk is the third jury chair to oversee the selection of cross-border investigative projects under IJ4EU’s Investigation Support Scheme, which offers grants of up to €50,000 to journalistic teams based in the European Union and EU candidate countries.

She takes over the role from Lydia Cacho Ribeiro, a Mexican investigative journalist living in exile in Spain. Before that, the chair was Wolfgang Krach, editor-in-chief of Germany’s Süddeutsche Zeitung.

“She also exemplifies bravery and resilience under pressure, not least in her recent reporting from the frontlines of Russia’s invasion of Ukraine. We’re honoured to have her.”

Gumenyuk is the founder and chief executive of the Public Interest Journalism Lab (PIJL), which promotes constructive discussion around complex social issues.

Since Russia invaded Ukraine in February 2022, PIJL has turned its attention to frontline reporting, even as it continues to promote fact-based public interest journalism. It launched “The Reckoning Project: Ukraine Testifies”, which documents war crimes and crimes against humanity.

“I started my career as a foreign correspondent and now, more than ever, believe that cooperation, sharing resources and promoting better understanding can multiply our efforts — not just highlighting common troubles but helping us see solutions,” Gumenyuk said.

“Living through the aggression against my country, Ukraine, I’ve also observed how pivotal the resources are for doing our job properly. For me to chair the IJ4EU jury is an enormous responsibility, to ensure that projects that can best serve the public good become reality.”

An independent jury plays a critical role in IJ4EU’s funding model, which allows public and philanthropic money to flow to investigative projects all across Europe without fear of editorial interference.

Donors to the fund are not allowed to influence the selection of projects and the IJ4EU project partners — IPI, the European Journalism Centre and the European Centre for Press and Media Freedom — are committed to protecting the editorial independence of grantees.

Jury members are all distinguished experts in investigative journalism. They hail from all across Europe and bring a range of expertise and perspectives to the selection of projects. Aside from Gumenyuk, their identities will not be made public until all projects have been selected for funding in 2023.

Gumenyuk is the author of several documentaries and books, including The Lost Island: Tales From The Occupied Crimea and The Maidan Tahrir.

She writes regularly for The Guardian, The Washington Post, Rolling Stone, Die Zeit and The Atlantic and provides commentary for TV outlets such as CNN, MSNBC and Sky News.

Gumenyuk co-founded the independent Hromadske TV and Hromadske International, which she ran for five years. She remains a board member of both.

Gumenyuk is a member of the Council on Freedom for Speech, set up by Ukraine’s Presidential Office and intended to help record and eliminate threats to freedom of speech and to protect journalists’ rights.

She is also a member of the Independent Media Council established by the Centre for Democracy and the Rule of Law, the Institute of Mass Media, Internews Ukraine, Detector Media and the Souspilnist Foundation.

In 2022, Gumenyuk received a Free Media Award from Fritt Ord Foundation for her war reporting from Kharkiv, Bucha, Mykolajiv and elsewhere in Ukraine.

“With integrity, humanity and depth, she gives a voice to the victims of war. Gumenyuk also makes astute observations about the resistance in the Ukrainian community,” Fritt Ord said.

On September 1, the IJ4EU fund opened its latest call for proposals for cross-border investigative projects in the public interest.

Managed by IPI, the Investigation Support Scheme is open to cross-border journalistic teams of any kind, including newsrooms, specialist investigative organisations and freelancers.

A parallel grant scheme run by the European Journalism Centre is open to teams made up primarily of freelancers. The Freelancer Support Scheme has a separate independent jury and offers grants of up to €20,000 plus mentoring, training and additional support.

The deadline for applications under both schemes is October 13, 2022. The next call for proposals will be in January 2023.