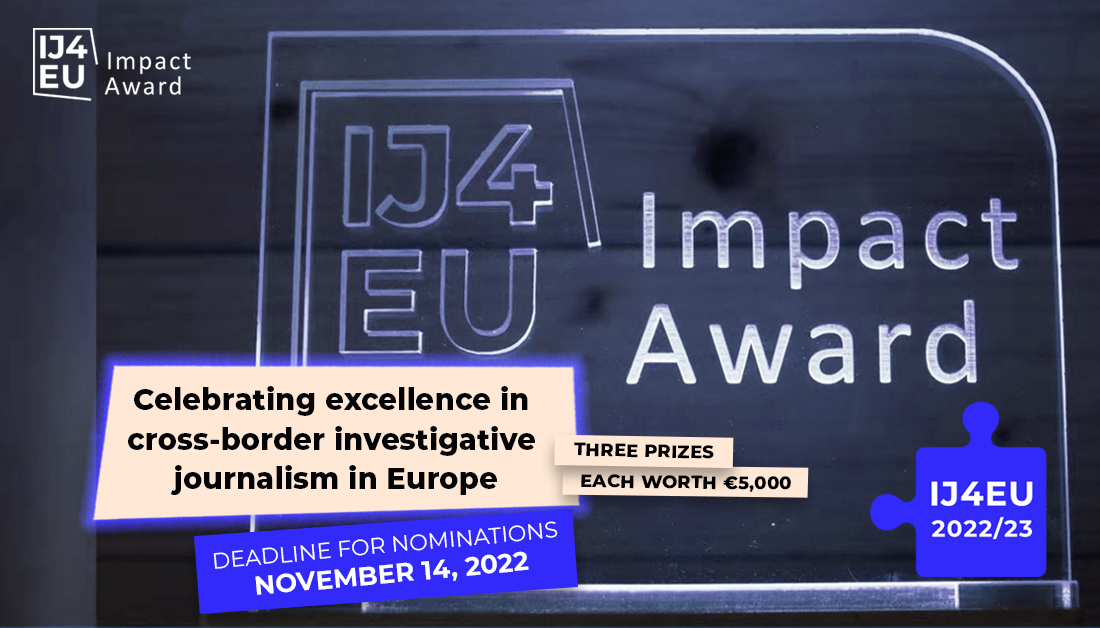 The IJ4EU fund has opened nominations for its annual award celebrating the best of European cross-border investigative journalism, with three cash prizes of €5,000 available for teams that collaborate on transnational issues in the public interest.

Nominations opened on 10 October for the third annual IJ4EU Impact Award, run by the European Centre for Press and Media Freedom (ECPMF), one of three organisations implementing the IJ4EU programme.

The deadline for nominations is 14 November at 23:59 CET.

Winners will be announced at an awards ceremony organised by ECPMF at a summit of the Media Freedom Rapid Response mechanism in Leipzig, Germany on March 31, 2023.

It is open to any teams that meet the eligibility criteria, whether or not they have received IJ4EU funding. Investigations must have been published between 1 October 2021 and 30 September 2022.

Last year’s winners were The Pegasus Project, Frontex Complicit in Pushbacks and The Logbook of Moria. The jury singled out a fourth investigation — Cities for Rent — for special commendation.

Anyone is welcome to nominate investigative projects, including their own journalistic work, as long as the projects were published via a credible medium (e.g. print, broadcast television or radio, online, documentary film, multimedia etc).

A team of independent researchers will start to evaluate the impact of the nominated projects in mid-November. They will then be ranked according to:

In early 2023, an independent jury set up by ECPMF will review the ranked nominations (including a shortlist of the top 10) and select three cross-border investigations as winners. You can view last year’s jury here. Each award will be worth €5,000.

For more information, see the Awards page on the IJ4EU site and the relevant section in our frequently asked questions.