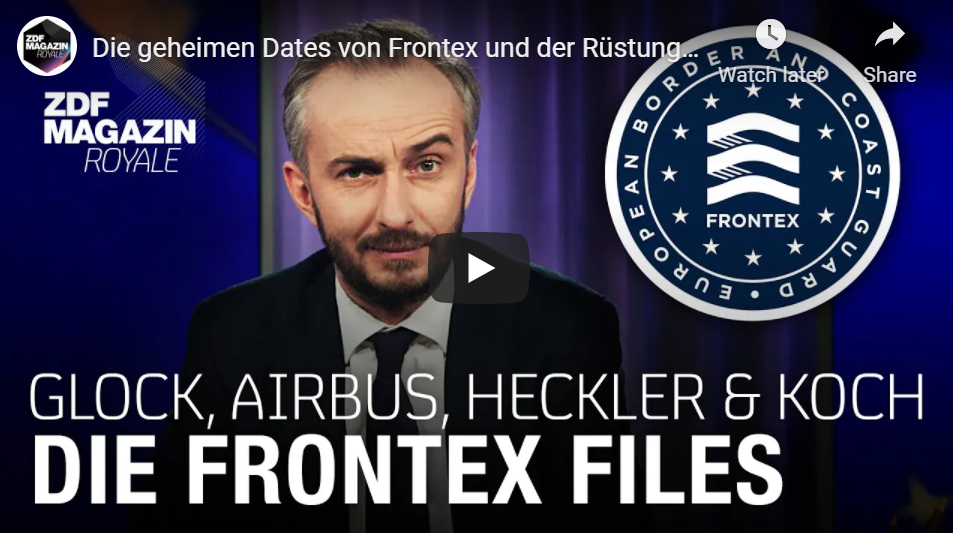 Frontex, the EU border agency, has met repeatedly with unregistered arms lobbyists to hear sales pitches about high-tech border surveillance kit including drones, planes and even blimps. It has then lied about those meetings.

Those are the findings of a team of four investigative journalists and two researchers from five countries, working with German right-to-know watchdog FragDenStaat, after months of probing allegations of human rights violations by the EU’s fastest-growing agency.

Through analysis of 142 unpublished documents acquired through freedom-of-information requests, the investigation revealed evidence that squarely contradicts the agency’s claim: “Frontex does not meet with lobbyists.”

“Glock, Airbus, Heckler & Koch. From 2017 to 2019, the European Border and Coast Guard Agency held 16 meetings with lobbyists – and the list of participants reads like a Who’s Who of the weapons industry,” the team says on frontexfiles.eu, a microsite set up with German satirical investigative show ZDF Magazin Royale.

“Handgun catalogs were passed around, and the virtues of surveillance drones were detailed in eye-catching PowerPoint presentations. No external observers were in attendance, and Frontex hasn’t let the public know what was discussed at these meetings. Members of the European Parliament asked Frontex two years ago to publish a lobbying transparency register, but that still hasn’t happened.”

The investigative team has done the next best thing, publishing all the documents on frontexfiles.eu for public scrutiny.

The investigation has yielded a barrage of headlines (see below) and much chatter on social media.

In a ZDF Magazin Royale episode devoted entirely to the issue, presenter Jan Böhmermann delved into allegations of complicity in illegal maritime “pushback” operations by Frontex forces exposed by another IJ4EU-funded investigation, Frontex at Fault. On the show, a former Frontex officer speaks anonymously about how Frontex deals with pushback.

Millions of viewers in Germany watched the show while a version published on YouTube (with English subtitles) had attracted more than a million views as of April 2021. Big media picked up the story across Europe, including  Politico, Der Standard and Welt.

The publication of the files triggered further investigations by media houses such as Les Jours and Der Standard. And it sparked reaction from private parties involved in the Frontex industry meetings. The University of Darmstadt, for example, responded with a lengthy Q&A.

The investigation also revealed that in a bid to stop migrants and refugees entering Europe from northern Africa, the EU has shifted its focus from patrolling the central Meditteranean with surface vessels to aerial surveillance by drones and planes.

This has led to dozens of pushback operations carried out by the Libyan Coast Guard following tip-offs by Frontex. Some legal experts say this amounts to complicity in human rights abuses.

The investigation highlights a lack of effective mechanisms to hold Frontex accountable for its actions during operations or monitor alleged violations of human rights.