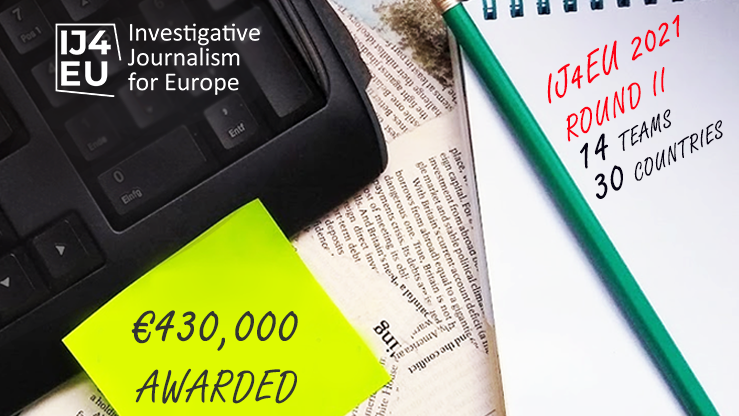 Fourteen teams of investigative journalists from across the European Union have secured grants under the second round of the IJ4EU fund’s flagship Investigation Support Scheme for cross-border journalism.

An independent jury awarded a combined €430,000 for investigations on topics ranging from international money laundering and the Belarus–EU border crisis to war crimes prosecutions and corruption in sport.

Run by the Vienna-based International Press Institute, the Investigative Support Scheme has a total war chest of €850,000 in 2021. In August, the jury awarded €420,000 to 14 teams after the scheme’s first call of the year.

In no particular order, the successful projects chosen under the latest call are:

The successful teams were chosen from more than 100 applications to the second call of the Investigation Support Scheme, which provides grants of up to €50,000 to help journalists across the EU collaborate on transnational stories in the public interest.

The 14 teams awarded include journalists based in 30 countries — 18 EU member states, two EU candidate countries and 10 other countries including Switzerland, Ukraine and the United Kingdom.

The independent jury met in mid-October to assess applications from teams of media outlets, freelancers and non-profit investigative organisations seeking a combined €2.9 million in funding.

The other members of the jury were Simon Robinson, global managing editor of Reuters; Natalia Antelava, co-founder of Coda Story; Harry Karanikas, a veteran Greek investigative filmmaker and reporter; and Leila Bičakčić, director of the Centre for Investigative Reporting in Bosnia and Herzegovina.

Independence and integrity are central pillars of the IJ4EU fund. Jury members recused themselves from evaluating applications in which they declared a possible conflict of interest.

The criteria used to select the projects are published on the IJ4EU website and include newsworthiness and public interest, expected impact, cross-border relevance, the strength of research and publication plans, feasibility and adequate risk assessment. IJ4EU urges teams to pay special attention to the challenges of reporting in a time of public health crisis.

Altogether, IJ4EU has allocated more than €1.1 million in grants in 2021, alongside other forms of assistance such as mentoring, editorial support and legal help.

The Investigation Support Scheme runs in parallel to another IJ4EU funding and mentoring scheme designed exclusively for freelancers. In August, a separate independent jury awarded €262,000 in grants to 15 teams under the Freelancer Support Scheme, which is managed by the European Journalism Centre and had just one call in 2021.

Nominations are still open for the second annual IJ4EU Impact Award, celebrating the best of European cross-border investigative journalism. The deadline for nominations is November 14, 2021.

IJ4EU Impact Award winners will be announced at IJ4EU’s #UNCOVERED conference next year. Both the award and the conference are organised by the European Centre for Press and Media Freedom.