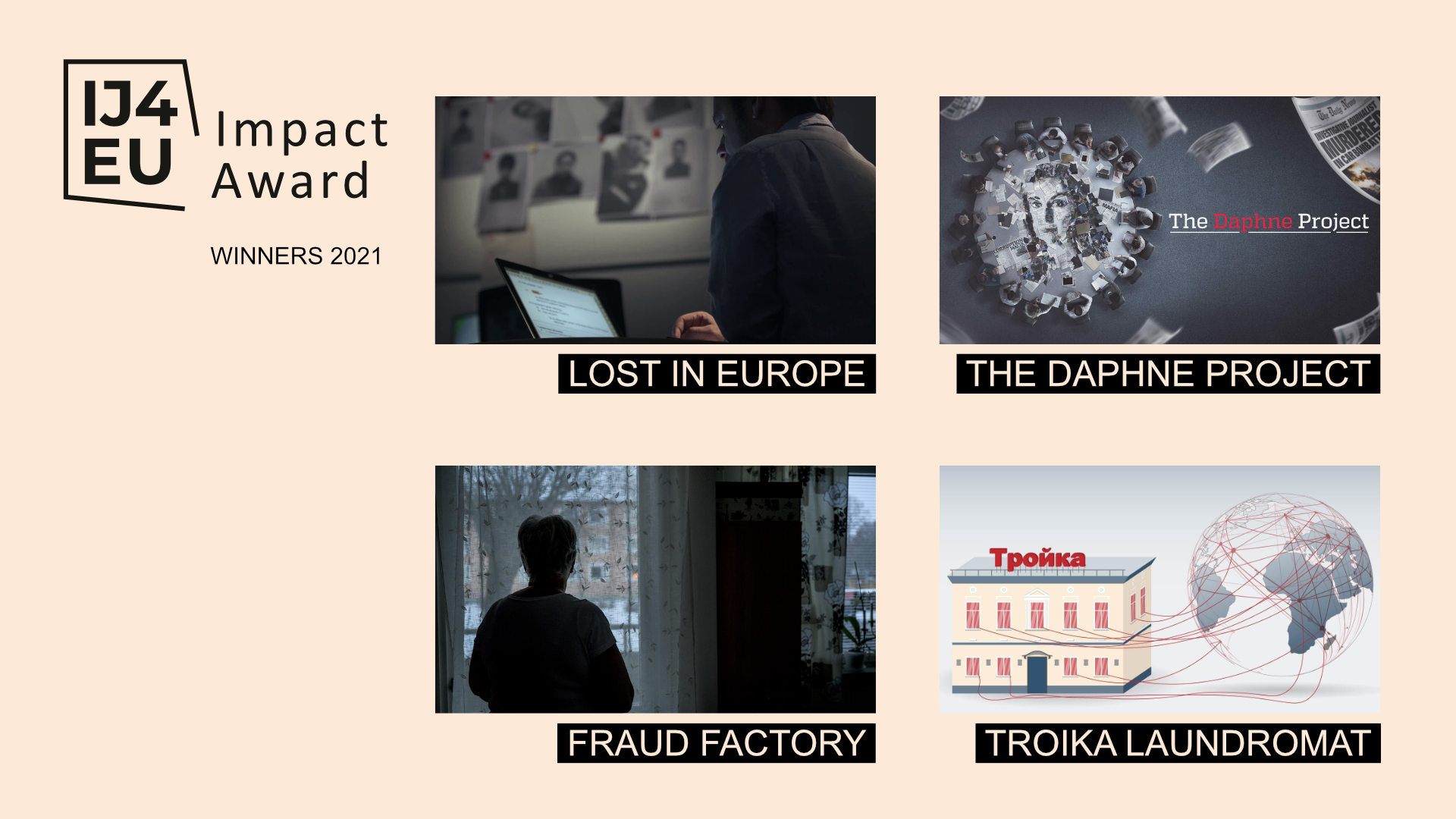 In no particular order, the winning investigations were:

Selected by an independent jury, the team behind each investigation receives €5,555.

“We were all in agreement that The Daphne Project was a deserving winner, coordinating many journalists to continue Daphne Caruana Galizia’s work and having a clear and important impact,” Shaun Walker, central and eastern Europe correspondent for The Guardian newspaper and jury chair, said.

“Lost in Europe shone an important light on the terrible story of missing migrant children. The Troika Laundromat was impressive for the sheer size of the team involved, matched by the size of the vast sums of money it was investigating. The Fraud Factory was a tenacious piece of work that put human faces to a sad story of cross-border fraud.”

Walker announced the winners during a ceremony on April 14 at #UNCOVERED, the annual conference of the IJ4EU fund.

The IJ4EU Impact Award recognises the best investigative journalism carried out by teams collaborating across frontiers in EU member states and candidate countries.

Managed by the European Centre for Press and Media Freedom (ECPMF) in cooperation with IJ4EU partners the International Press Institute (IPI) and the European Journalism Centre (EJC), the prize was open to investigations published in 2019 and 2020.

Jury members praised the overall quality of nominations but singled out the four winners as exceptional examples of watchdog journalism on transnational subjects.

The Daphne Project picked up the unfinished work of Maltese journalist Daphne Caruana Galizia, who was killed in October 2017 by a car bomb just metres from her home.

Led by Forbidden Stories, a group of 45 journalists representing 18 news organisations from 15 countries, the investigation changed the course of political life in Malta while raising awareness of the dangers facing journalists.

The Troika Laundromat is an investigation into an $8.8 billion network of offshore companies used by Russian politicians and criminals to acquire shares in state-owned companies, buy real estate, purchase luxury yachts and more.

Led by the Organized Crime and Corruption Reporting Project (OCCRP), it involves 1.3 million leaked banking transactions from 230,000 companies, with stories published in 19 media outlets in Europe and elsewhere.

Lost in Europe sought to discover what had become of thousands of migrant and refugee children who had gone missing in Europe, some falling into the hands of drug gangs and sex traffickers.

The team of investigative journalists from Belgium, Britain, France, Germany, Greece, Italy and the Netherlands succeeded in bringing widespread attention to a pressing issue that transcends borders.

Fraud Factory is another OCCRP-led investigation, this time exposing the work of a Kyiv-based scamming group that targeted elderly people in Europe to defraud them of their savings.

The project includes a 15-minute video containing secret footage shot by a whistleblower at great personal risk. The jury hailed the investigation as an impressive piece of old-fashioned, cross-border journalism.

The jury chose the IJ4EU Impact Award winners from a shortlist of 10 nominations drawn up by independent evaluators assembled by ECPMF.

“It was a fantastic shortlist to choose from and it took some time to come to agreement because all of the entries were strong in different ways — some were wide-ranging cross-border cooperations involving dozens of journalists, while others were much more narrow in focus but nonetheless brilliant pieces of journalistic work,” Walker said.

“None of these stories could have been reported in only one country and all four winners showed, in different ways, the benefits of working across borders in our interconnected world.”

In addition to Walker, the jury members were Christian Jensen, executive editor-in-chief of Danish newspaper Politiken; Nassira el Moaddem, an award-winning French journalist, author and TV show host; Teresa Ribeiro, representative on freedom of the media for the Organization for Security and Co-operation in Europe; and Andrzej Rojek, a Polish-born US philanthropist and freedom-of-speech advocate.

Now in its second year, IJ4EU provides grants and other forms of support to teams of journalists or news outlets in Europe investigating topics of public interest across borders.

It is led by IPI, in partnership with EJC and ECPMF, and funded by the European Commission with co-funding from Open Society Foundations, Fritt Ord, Luminate and the City of Leipzig.

To be eligible for the IJ4EU Impact Award, teams need not have received support from the fund, but two of the winners — the Daphne Project and Lost in Europe — were grantees during the first edition of the programme.

Documentaries associated with three of the winning projects were among videos screened on the first day of #UNCOVERED.

The conference brought together journalists, funders, policymakers and civil society members to explore the highs and lows of cross-border investigative journalism.

Free registration is open for day two of the conference on April 15. See the agenda here.