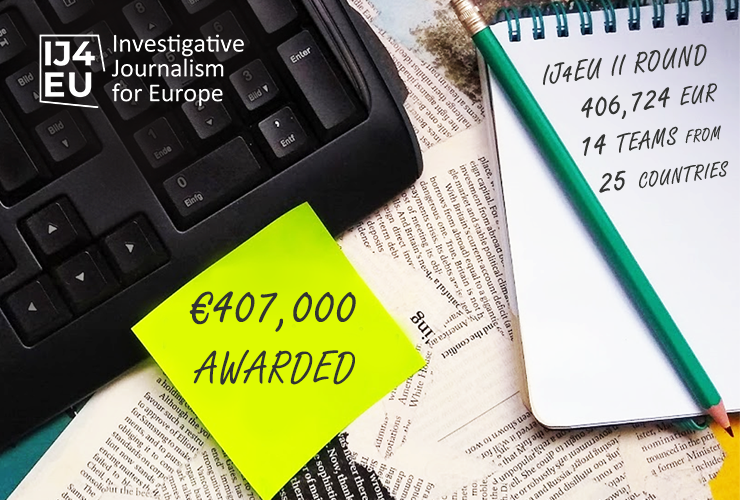 Fourteen teams of journalists from across the European Union have secured grants under the latest round of the IJ4EU fund’s Investigation Support Scheme for new cross-border investigative projects in the public interest.

An independent jury awarded a combined €406,724 for investigations on topics ranging from Covid-19 disinformation and tax avoidance by arms producers to Europe’s housing crisis, the illegal wildlife trade and the misuse of EU funds.

“For the jury, it was great to see how many excellent new investigative journalism projects from all over Europe applied for funding in the second round,” said Wolfgang Krach, editor-in-chief of Germany’s Süddeutsche Zeitung, who chaired the independent jury.

“It was a difficult choice. But it is encouraging to see how many teams of journalists and media outlets are strengthening their investigative efforts.”

The successful teams were chosen from more than 140 applications made under the second call of the year of the Investigation Support Scheme, which provides grants of up to €50,000 for cross-border projects in EU member states and candidate countries.

Altogether, the jury has allocated €863,948 to 25 investigative projects under the scheme this year. (See the results of the first call, announced in July).

The 14 teams awarded under the second call include journalists based in 23 EU member states plus Britain.

In no particular order, the cross-border teams and projects are:

The independent jury met online in mid-October to assess applications from journalistic teams based in 33 EU member states and candidate countries plus 14 other nations, seeking a combined €4.3 million in funding.

In addition to Krach, the jury members were Giannina Segnini, a professor of data journalism at Columbia University and a Costa Rican investigative journalist; Cândida Pinto, deputy director for news at RTP public broadcaster in Portugal; Espen Sandli, editor-in-chief of Drammens Tidende in Norway; and Leila Bičakčić, director of the Centre for Investigative Reporting in Bosnia and Herzegovina.

Jury members recused themselves from evaluating applications in which they declared a possible conflict of interest.

The criteria used to select the projects are published on the IJ4EU website and include newsworthiness and public interest, expected impact, cross-border relevance, strength of the research and publication plans, feasibility and adequate risk assessment. IJ4EU urges teams to pay special attention to the challenges of reporting in a time of public health crisis.

Under the second call of the Investigation Support Scheme, teams will strive to publish their investigations by the end of March 2021. Stories must be published by respected news organisations or platforms in at least two EU member states or at least one EU member state and one EU candidate country.

The two schemes are the backbone of the IJ4EU fund, which will disburse over €1 million in grants to investigative projects on transnational issues in the public interest in 2020 following a successful pilot year in 2018. The project includes additional assistance in the form of training, editorial support and legal aid.

IJ4EU has also launched an award to celebrate the best of European cross-border investigative journalism and plans to hold a conference early next year to encourage networking and innovation. Both the award and the conference are run by the European Centre for Press and Media Freedom (ECPMF).