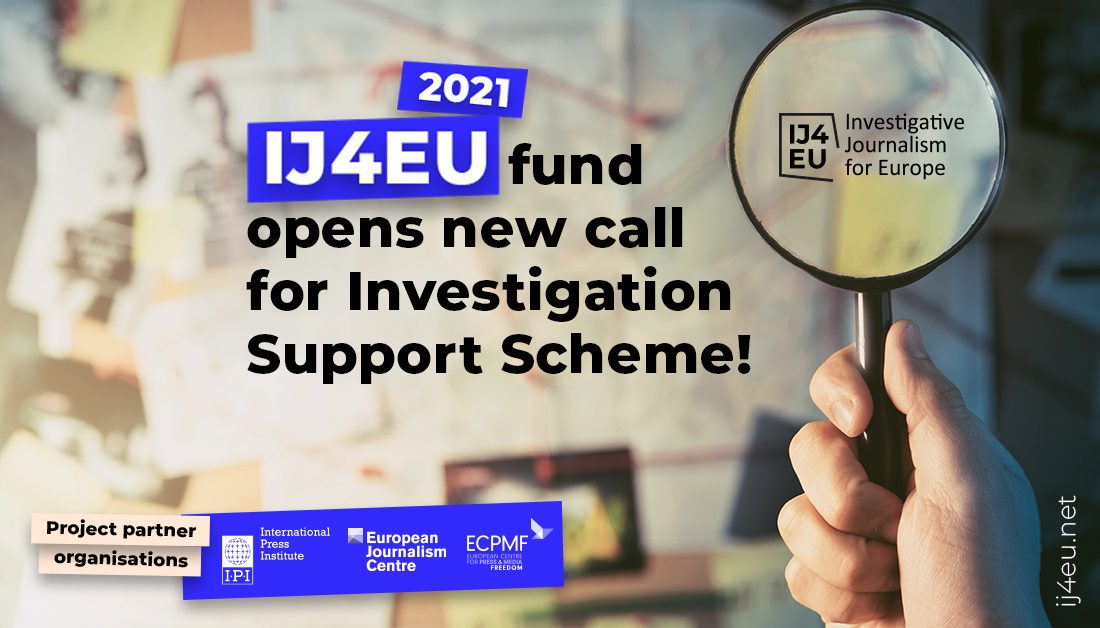 Read this article in:

The IJ4EU fund launched a new call for applications to its Investigation Support Scheme on August 23, offering grants of between €5,000 and €50,000 for cross-border journalistic projects in the European Union.

The scheme’s second call of 2021 is open to teams of any kind, including newsroom collaborations and teams made up entirely of freelancers.

The deadline for applications is 4 October at 23:59 CEST. See full information and frequently asked questions.

The Investigation Support Scheme is managed by the International Press Institute (IPI). The latest call of 2021 follows a successful first round, in which an independent jury awarded €420,000 to 14 cross-border teams led mostly by newsrooms.

All types of teams eligible

Teams of any kind are now invited to submit proposals, including those that applied unsuccessfully to the Freelancer Support Scheme or the first round of the Investigation Support Scheme.

Launched with a single call in June, the Freelancer Support Scheme goes above and beyond grant funding to offer extra layers of tailored assistance, such as mentoring and training. The Investigation Support Scheme, for its part, mainly offers financial help.

“Now that the Freelancer Support Scheme is closed for 2021, the IJ4EU project partners thought carefully about whether to relax the rules to allow all-freelancer teams to apply for the second call of the Investigation Support Scheme, alongside their colleagues from newsrooms,” Timothy Large, IJ4EU programme manager for IPI, said.

“In light of the tremendous demand for funds that we’ve seen from freelancers and news outlets alike, we decided it made sense to expand the eligibility criteria to give as many journalists as possible the opportunity to get financial support.”

In total, the IJ4EU fund will provide €1.1 million in direct grants to support cross-border investigative journalism in the public interest in 2021. Approximately €835,000 will be distributed through the Investigation Support Scheme.

The geographical eligibility criteria remain the same. Applications must be submitted by teams with members based in at least two EU member states or at least one EU member state and the United Kingdom. (UK-based journalists will still be fully eligible for the 2021 IJ4EU grants.)

IJ4EU also welcomes applications from journalists based in official EU candidate countries and third countries, as long as they team up with colleagues in at least two EU member states.

Projects must focus on topics of cross-border relevance. Investigations on all topics will be considered.

Teams working in all types of media — including print, broadcast, online media, documentary filmmaking and multi-platform story-telling — will be considered. Projects must aim to be published by media outlets in at least two countries.

Grants under both schemes are awarded by independent juries made up of distinguished senior editors, investigative journalists and journalism experts. Read more about the selection process and criteria.

The IJ4EU fund is managed by a consortium of three organisations: the International Press Institute (IPI), the European Journalism Centre (EJC), and the European Centre for Press and Media Freedom (ECPMF). IPI leads the consortium and manages the Investigative Support Scheme.

The IJ4EU programme is co-funded as a Preparatory Action by the European Commission (DG Connect). In 2020, it received additional funding from Open Society Foundations, Fritt Ord, Luminate and the City of Leipzig. The programme maintains complete independence from donors in the selection of projects and strictly guarantees the editorial independence of all grantees.